Everybody is welcome; there is no membership subscription.

The Welland valley was a focus for prehistoric settlement, as is being discovered by archaeological excavations in advance of gravel extraction –  which then removes all traces. The speaker, Andrew Hatton (known as Bob) was involved with the 1990s excavation at Stowe Farm near Greatford.

More recently, as part of his research for an M.Phil. at Sheffield University, he has analysed the different phases of settlement to be found on the site and completed a review of Bronze Age field systems located along the Welland Valley, including the Rectory Farm site at West Deeping. The aim of the research was not only to record and interpret the archaeology but to place the site at Stowe Farm in a local and regional context. Previously Archaeology Supervisor for Cambridgeshire County Council’s Archaeology Field Unit, Bob is now a lecturer and Coordinator for Archaeology and Landscape History at the University Centre, Peterborough

Our programme for Autumn 2018 starts off with something special!

Thanks to Breedon West Deeping Quarry and PCAS Archaeology Ltd , West Deeping Heritage Group invites everyone to an exhibition in the Village Hall about the Rectory Farm archaeological investigations, on Stamford Road, West Deeping

followed at 7.30 pm by West Deeping Heritage Group’s first talk of the season

Simon Savage of PCAS Archaeology Ltd: “Fresh from the Fields: an archaeological update from the Rectory Farm site at West Deeping”

It was 6 years ago that we last heard from the archaeologists about the extensive multi-period landscape in the fields to the north of the village, which has been progressively surveyed and excavated since the 1990s. This important site has revealed evidence of settlement and land use dating from the Neolithic period, including a late Bronze age co-axial field system, Iron age enclosures and a Roman British villa with a bath house.

“Not All Bling! 20 Years of Treasure”

Helen Fowler, Peterborough and Cambridgeshire’s Finds Liaison Officer, marks the 2oth anniversary of the Treasure Act and talks about the shiny, and not so shiny, historic items found by the public.

The Treasure Act 1996 came into force in September 1997 and replaced the common law of treasure trove dating back to medieval times. Finders of objects that might be defined as treasure have to report their find to their local coroner. The act also introduced the Portable Antiquities Scheme to deal with voluntary reporting of non-treasure finds by metal detectorists and general members of the public – more than 815,000 archaeological objects have now been recorded on the PAS database. 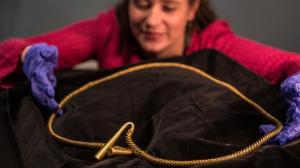 Not many finds are as spectacular or unusual as this one unearthed, in a Cambridgeshire field last year. A gigantic gold torc, so big one expert thinks it may have been worn to protect a pregnant woman, was found by a metal detectorist. It was made from 730 grams of almost pure gold more than 3,000 years ago, and is regarded as the best to be found in England in more than a century.

Unfortunately, Helen will not be able to bring this along to show us!

Village Hall, King Street, West Deeping from 7 p.m. Refreshments will be served before the talk starts at 7.30 p.m.

All are  welcome; membership is not required; £2.50 at the door including refreshments

At West Deeping Heritage Group’s first meeting of the year, Mike Clatworthy talked about ‘Pottery in the local archaeology’ which led into a hands-on, workshop session.

Even the person who admitted that pottery wasn’t really their thing couldn’t fail to be impressed by Mike’s enthusiasm for his subject. His knowledge of pottery and archaeology developed from a childhood passion for picking things up from the soil and a lifelong need to collect things!

Finds around the badgers’ hole at Torpel Manor Field

Mike introduced himself as a ‘HAG’ – but quickly explained that this means he is a member of the Heritage and Archaeology Group, linked with the Langdyke Countryside Trust. Their project to investigate the history of Torpel Manor field at Helpston provided him the opportunity to indulge his collecting interests. With the help of landscape historian and archaeologist Professor Stephen Upex, an archaeological research team from York University led by Steve Ashby and a workshop led by Paul Blinkhorn, previously of Time Team, Mike has himself become something of an expert in identifying and dating finds. Although Torpel Manor Field is a scheduled Ancient Monument and cannot be excavated, badger activity has helped to unearth many examples of pottery, particularly from the medieval period. Sifting through molehills has had some success too – with Roman and medieval pottery sherds discovered – and is an ideal way of introducing children to archaeology.

When an archaeological test pit was dug at the local school the children’s enthusiasm inspired several Helpston residents to dig their own, and Mike has been closely involved with identifying pottery and other artefacts. About 140 fragments of Roman pottery were found in one test pit providing the new and  exciting evidence of a possible Roman farmstead in the back garden of the Exeter Arms. No Roman remains (apart from the villa further west) had been previously identified in Helpston.

Before he let us loose on the extensive collection of finds he’d brought with him, Mike Clatworthy urged us all to keep our eyes open and pick up anything we see of interest whenever we walk the local fields or when we’re digging our gardens – you never know what you might find. 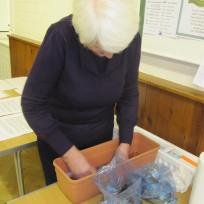 Mike brought examples of pottery for us to try our hand at different stages of processing – washing, sorting, identifying and labelling. Some of us had a go at trying to match up the Torpel Manor finds with the identification schedule – harder than it sounds!

Several people brought a find to be identified – but the first thing to establish was whether it was pottery!

Graham Magee’s find was from the bank of the disused Stamford Canal in front of the  Granary. It looked as if it could have come from the base of a large round dish – but Mike was able to recognise it immediately as a ‘concretion’, not man-made and not a pot.

A concretion: a gypsum-bound clay nodule 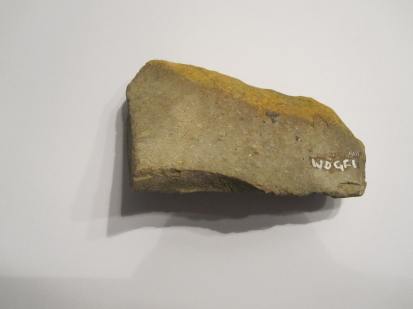 A concretion is a hard, compact mass of matter formed by the precipitation of mineral cement within the spaces between particles, and is found in sedimentary rock or soil. Mike thought that Graham’s find is almost certainly a gypsum bound clay nodule. A concretion like this would resist weathering and end up on the surface or cast aside when digging clay for various purposes. They vary greatly in size but are generally found as flattened spheres. The fragment seen was almost certainly split off by frost action, though it did look pretty intriguing at first. A bit disappointing if you’re expecting a piece of pottery, but still interesting in the context of the canal’s history. Clay was used to line the bed of the canal to make it watertight – which evidently worked well in this stretch alongside Molecey’s Mill as the old canal is still holding water 350 years after it was constructed!

Allan Crowson’s find was from a field to the east of the village, originally called Mill Field, in Market Deeping. Between the Greatford Cut and Millfield Lane, it is not far from the Roman farm and villa discovered in 1994 at the Rectory Farm site to the west. This was definitely pottery, but not part of a roof tile as Allan had at first thought. Mike identified it as a piece of the rim of a Roman mortarium, a container with coarse sand or grit embedded in the surface used for pounding or grinding with a pestle. Roman tastes in food favoured the use of sauces, relishes and subtly-blended herbs and spices. Such ingredients often needed to be ground or puréed, and a strong mixing-bowl with a grit-roughened interior was, therefore, an essential kitchen utensil. Mortaria first appear in Britain before the Roman conquest, implying that there were people, whether British or immigrants, who enjoyed Roman cuisine.

So remember, always pick up any unusual items! West Deeping Heritage Group would really like to know about anything you find in the village. 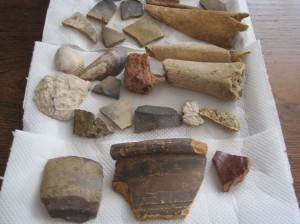 On Tuesday 10th January,  Mike Clatworthy, of the Langdyke Trust, talks about Pottery in the local archaeology and in particular, finds from Torpel Manor Field and Helpston. Bring your own pottery finds to be identified.

West Deeping Heritage Group’s collection of local pottery finds (donated by one of our supporters) will also be on display.